Learn about the Mercury’s placement in the 1st house of your astrology/natal chart and what it means for your personality. 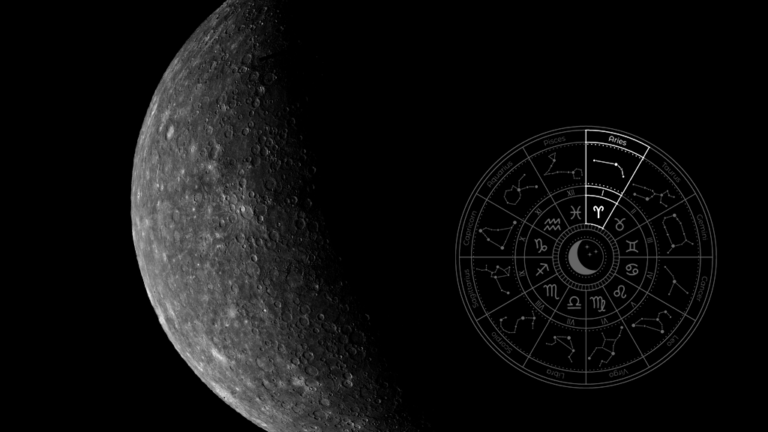 Marking the beginning of a person’s journey, the 1st house is about one’s identity and self-expression.

With the fastest planet rising on the eastern horizon during their birth, natives of Mercury in 1st house are noticeably quick-witted and talkative, never running out of ideas and arguments.

Inquisitive and spontaneous, they are eager to try new and unusual things. Their hunger for knowledge makes them swiftly start new things; however, this doesn’t automatically mean they will finish what they started.

Moreover, since the 1st house shows one’s impression of others, natives may be more concerned with appearing intellectual rather than being smart. How they appear to others is as important as how they communicate.

Putting importance on their inner and outer bodies, natives of Mercury in 1st house will benefit from reading this article that will shed light on how they make their entrance and how others perceive them.

Outcomes Of Mercury in 1st House

Since it is concerned with a person’s essential qualities, the sum total of one being, the 12th house Mercury generally affects these aspects:

The placement of Mercury bears the following specific outcomes for its natives:

With their outgoing personalities, natives radiate positive energy that makes others want to follow them.

This, along with their strength in humor and communication, makes them great storytellers. They are the life of the party, surrounded by people that listen to whatever they share.

They also value knowledge and well-educated individuals even without a degree.

Driven and curious, they want to unravel the world’s mysteries, curious to solve all that is unsolved and discover all that is undiscovered.

They have strong critical thinking skills and imagination, making them highly intellectual.

Just like the adjective ‘mercurial’ suggests, natives of Mercury in 1st house are flexible and open-minded.

They can easily change with the times, not having a problem adapting to anything different thrown their way.

Since they have too many ideas, natives want to keep sharing them, making them monopolize the conversation and be seen as self-centered.

People around them may find talking with them exhausting since they seemingly don’t stop talking and don’t pay attention to others.

Having too many ideas also means that their minds are working all the time, and this causes continuous mental pressure. Natives may want to avoid caffeine, as their nervous system can’t handle their hunger for information, leading to extreme nervousness.

When faced with someone equally intelligent, they may lose their self-esteem, especially when invested in appearing intellectual.

With Mercury’s placement in the 1st house, natives should also carefully think before they act; their straightforwardness can get them into trouble.

Since individuals with Mercury in the 1st house are very expressive beings, they also want an expressive partner. However, success in relationships doesn’t stop at finding such partners; they need to be on the same page.

Natives have to remember that it’s not always important to win arguments; they have to listen to their partners and consider their thoughts as well. Both sides need to know when to talk and listen to have a harmonious relationship.

With Mercury’s placement, natives must be careful as they are susceptible to cheating.

They need to deny the planet’s mercurial temperament and avoid being curious about areas they shouldn’t be.

With their talent for speaking and communication, they excel in careers where they can express themselves and share their works in the limelight. Natives with Mercury in 1st house are usually great public speakers, writers, or journalists.

Natives are also good at analysis and debates; their interest in philosophy makes great debates and teachers. On the other hand, with their expressive nature, they will also be good in fields related to creatives or the arts.

However, they must pay attention to the frequency at which they start projects.

Because of their spontaneity, natives should think twice before joining multiple projects, as they may try several things without seeing them through to the end.

A partner’s Mercury in the native’s 1st house signals a great start.

With the natives’ good communication skills, they can get along with their partners and, with their straightforward nature, can even give them a confidence boost if needed.

Their ease with each other helps them showcase their creativity and self-expression. However, this doesn’t guarantee a long and serious relationship, especially when conversations seem to be on a superficial level.

That being said, with their mercurial personality, natives can also easily find things to talk about to strengthen their connection. Their ability to engage in small talk can come in handy in rekindling that old flame.

People around natives of Mercury in 1st house will immediately notice their talkative nature, which can make people attracted or exhausted.

However, with their driven and quick-witted personality, on top of their versatility, they will be successful wherever as long as they make time to listen to others.

With the fastest planet’s placement in the house of self, natives have to pay attention to the things they start on a whim.

Spontaneity is something that people like only if it yields positive results, not a long list of backlogs.